Tube feeding and weaning in children with Costello syndrome 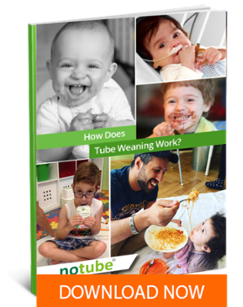 Does your tube fed child have Costello syndrome?

All you need to know about tube feeding and weaning

Although most children are born with normal weight and height, children with Costello syndrome often have severe feeding difficulties during their first weeks or even months of life.

Many parents struggle enormously to feed their babies with Costello syndrome adequate amounts. In many cases, children are diagnosed with “failure to thrive” after the first weeks or months of life, which is considered the most common and challenging clinical problem in Costello children. The feeding situation might be very stressfull and exhausting for the whole family, which already has to deal with the situation of having a child with a genetic syndrome, and additionally has feelings of stress and guilt regarding the baby’s nutrition.

Due to the feeding disorder, which might lead to failure to thrive, most children with Costello syndrome have a feeding tube (nasogastric tube or G tube) placed during their first months of life. Since gastroesophageal reflux (GERD) might also be a big problem for patients with Costello syndrome, some of them have to undergo a surgical procedure (Nissen fundoplicatio) in order to improve the situation.

After feeding tube placement, children may gain weight sufficiently. Although some of them suffer from severe side-effects, such as recurrent retching, gagging or vomiting or poor tolerance of the tube feeds, which might lead to persistent growth retardation (Unintended side-effects of enteral nutrition support).

When the acute situation of malnutrition has been resolved, parents of children with Costello syndrome wonder if they will ever get rid of the feeding tube again.

Is tube weaning possible in children with Costello syndrome?

Children with Costello syndrome, as well as children with many other underlying diseases (The 10 most common medical conditions requiring long-term enteral feeding), might develop tube dependency, resulting in oral aversion as well as food refusal. Although the medical situation seems stable, the children do not succeed in the transition (back) to oral feeding. In this situation, the family needs help to overcome this obstacle. From a physiological point of view, children with Costello syndrome are able to eat and to experience the sensation of hunger, but need a highly specialized treatment for learning to eat orally.

We have treated and weaned more than ten children with Costello syndrome through our Netcoaching program or in our Eating Schools. All of these children succeeded in the transition from enteral to oral nutrition.

Emil, three years old, born prematurely with Costello syndrome and a heart defect, has been signed up for Netcoaching treatment. He got a G tube at the age of eight months. Until he was two years old, he accepted some food orally, but then stopped his oral intake completely. At program start, he suffered from severe side-effects of tube feeding: nausea, recurrent retching, gagging, vomiting. During Netcoaching, Emil started to accept high-caloric liquids orally, and was able to increase the amounts steadily so tube feeds could be stopped completely after two months. Half a year after completing the Netcoaching program, Emil’s G tube could been removed. Emil needed some time to improve his eating skills further, but finally learned to eat age-appropriate solid food.

Julia, born with Costello syndrome and a heart defect, and her family visited one of NoTube’s Eating Schools. Julia received a G tube at the age of 9 months due to failure to thrive. Before the G tube insertion, her mother had to feed her 15 hours a day!

The G tube helped her to gain weight, but led to recurrent vomiting, up to 10 times a day.  Before the start of the Eating School, Julia drank very small amounts and tried some food orally but didn’t swallow anything.

During the Eating School, the vomiting disappeared completely and Julia finally started to swallow some food! She liked yogurt best. Tube feedings could be stopped completely after six days in the Eating School, because she could sustain herself fully orally. Julia lost very little weight during the wean and was finally at home, using our ongoing support to gain weight on full oral feeds.