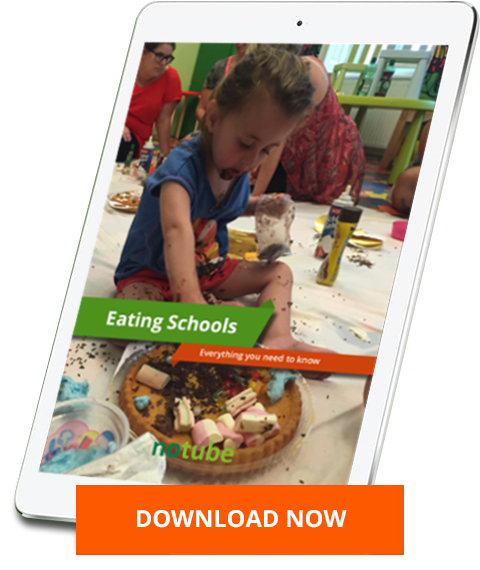 “Water is for cows!”

In the fight for health, feeding tubes save many children’s lives. When the tube is no longer medically necessary, it can and should be removed. But the child has to learn one thing first: eating.

One ought to write something, thus came the tip-off for an investigative piece: Apparently, there were these people in Graz, who claimed they could teach sick children to eat. From all over the world, children were arriving, and those guys in Graz just dumped some food on the floor and placed the children in it. And that was it!

Well, one should mention: Almost everything about this description is accurate. On a bleak Tuesday in October, Lian[i], for example, lies, stomach-first, in a sea of fruit purée, looking intrigued. Next to him crouches his mother, tense around the eyes. To Lian’s left, Lara is playing with salted crackers and some coloured goo, and behind her, surrounded by multi-coloured breakfast cereals, lurk her parents, hell-bent on cleanliness. It is, after all, only day 2. Breakfast. We are in Gnas, at an Eating School organised by NoTube LLC, Europe’s market leader in eating schools and tube weaning. A whiff of pigsty wafts through tilted windows. Grown-ups from eight different countries pluck, apprehensively and at the same time pedantically, gunk from the hair of ten children, with the most complicated and the saddest medical histories. Or they are chasing them with spoonfuls of custard, which will later drip from scrunched up lips. As I said: day 2. The parents first have to “bend into shape”, as the infant physiotherapist Eva Kerschischnik puts it.

This is indeed crucial. Not only because it makes it easier for everyone to do a good job, that is to say, NoTube can create an environment in which children, who literally cannot eat to save their lives, will learn to do that in the next 14 days. But also because the beyond long-suffering parents can only manage to help in this parallel universe, created by NoTube, once they have bent into shape. A universe jam-full with food, where anomalous commandments reign, where sugar is not the devil, but our best friend (makes hungry). Where phrases such as “water is our enemy” (no calories) are overheard. And where there are compelling arguments for why “worry is also a form of aggression” (prevents experience).

It is difficult to say how one ends up in this universe, in Gnas, where breakfast – here called a play picnic – is followed by rounds and consultations. But it all starts with the fact that there are children who cannot eat. They, as a result of the worst of adverse circumstances, could never even try to feed themselves to a sufficient degree, and therefore have readymade formula injected into their bodies, through a conduit called tube, which reaches all the way into the stomach or the small intestine and exits the body via the nose or through an artificial hole in the stomach. Which is a good thing, at least for a while, since it keeps the children alive.

Like Ana, for example, who is something of a celebrity in her home country. Several hundred thousand euros were donated for Ana’s treatment, because Ana was born almost entirely without an oesophagus. Doctors in a different country cut out a piece of her colon and manufactured it into an oesophagus. But then there were problems with the aftercare, and now, 20 general anesthesias later, Ana is actually sitting on her mother’s lap, in this strange universe, and her lucky chance rest on the fact that this is a universe, which has largely been constructed from her perspective.

Across from Ana sits Peter Scheer, MD, psychotherapist, author and overall what one pictures when a person is described as a “fine fellow”. He is one of the architects of this universe. Further feathers in his cap are the Institute for Medical Psychology at the University of Vienna, the German-speaking Association for Infant Mental Health and the psychosomatic department at the children’s hospital in Graz. At the latter, he developed, about 25 years ago – together with his wife, Marguerite Dunitz-Scheer – the method of tube weaning, which is known worldwide as the Graz model and based on just two approaches: The child, first, has to feel hunger. Secondly, the child’s autonomy has to be strengthened.

In connection to point one, it is sufficient to know that tube-fed children do not know hunger, since they are basically satiated around the clock. One therefore reduces the tube nutrition gradually, thus introducing the child to entirely new sensations, and at the same time ensures a steady supply of crisps, cola and chocolate confectionary…

The second approach, on the other hand, sounds boring, but is, in fact, completely radical. For, if one understands, like NoTube does, the problem of learning to eat from the perspective of the individual child, one puts the child in the driver’s seat of his own learning process. One therefore needs, since every little patient comes with his own requirements and restrictions for his autonomy, an individual therapy for every child. And, one has to get the parents to allow their child to lead the way. Anyway – the parents: Here in Gnas, one meets the bravest, most hopeful and burdened people. Parents, who had to watch their child being traumatised, cut up and categorised for his/her own benefit, and who are united by the desire to finally free their child from this tube, with its side effects of reflux, vomiting and developmental delays. If parents of healthy children are already prone to turning into helicopters, these parents constitute a squadron of Black Hawks, an elite unit, prepared to remove any and all obstacles. To them, Peter Scheer may just recommend doing nothing for a change. Except: Do not give them water, (“Water is for cows!”), be a role model and trust that the child will self-regulate. Emma, for example, 2 years old, pretty as a picture and very little. Physicians in Emma’s home country elected the diagnosis infantile anorexia, which there, in turn, means that Emma is not eating, because her mother did not love her enough when she was in her tummy. True story!

If you were to look out of the window of this Gnas’ guesthouse, you might see deer grazing and pheasants doing pheasanty things. Ana, on the other hand, has fixed her attention on a bread roll for more than an hour now and insists she will bite into it, at some point. This is an important step. “Ana is dealing with the topic in her way”, explains Sabine Marinschek, one of the psychologists on the team. “The ability to eat is innate. Often it is just about forming a new connection to this knowledge.”

Then there is another play picnic. The flexible ones are sitting on the floor with their plates, with cocoa pops stuck to their socks, and Niki, who cries a lot, is reproved by his dad. Topic: sitting still. Peter Scheer, who utters the brilliant sentence: “Your job is to make food fun for everybody”, explains that the most important thing about eating is the atmosphere. And yet he knows: This is day 2 for a father, who prefers to live on coffee and cigarettes, and who refuses to translate for his wife, who doesn’t speak English, that she ought to be a role model and eat a lot herself – she might put on weight, after all. Whereas Ana now has a bread roll in each hand. Lara is feeding her mum, whose help-seeking expression is picked up by the second psychologist, Karoline Pahsini: “That’s OK. You should feel free to decline.” Lian sulkily spits out some yoghurt. Emma’s mum leaves the room, crying.

Coffee break. Time to talk with the man, who – long before the terms child and competent were mentioned in the same breath in the mainstream – created a concept, which is mostly based on having confidence in children; who studied medicine and philosophy; who didn’t think himself ‘fit’ to reproduce, and yet has eight children, which is relevant in so far, as NoTube is, at its core, a family business, consisting of father, mother and three children, “expanded to people we have known for a long time”; who talks in printable phrases and handles language at least as respectfully as humans.

If you ask Peter Scheer, where this ideal of humanity, which forms the undercurrent to NoTube’s philosophy, originates, he replies: “This is just how Jewish children are raised. They are always asked about what they want…”, only to quote Werfel the next minute or, with an eye on the typical Falter reader, to raise the only semi-rhetorical question, whether it is OK to run NoTube as a company, when it means to profit indirectly from other people’s suffering? Answer: If you don’t want to scrounge, of course, it is. NoTube was founded in 2009 as an interdisciplinary spin-off company, as an online-coaching program, tailored to early infant behavioural eating disorders, with the original goal of being able to treat patients beyond the limited capacities of the children’s hospital. Since 2009, NoTube offers, in addition to the thriving Netcoaching business, Eating Schools in several countries and also telemedically supports the families after the camps. The demand is huge. Eight Eating Schools are planned for the coming year, by then they will take place in a dedicated school in Graz. The cost for the camp, in many countries covered by health insurance: just under €8,000. Three hundred children, according to estimates, are currently tube-fed in Austria. Half of them could eat.

Just like – Ta DAA! – Ana, who on occasion will now carry around five bread rolls, and will allow just about anyone, who is not her mother, to feed her. Or Lian, who, in spite of his mother’s anxiety, is even gaining weight. It is day 9, Gnas is tapping the bock beer, and even in the guesthouse there is no more false pretence. Trousers and shirts are food-stained, the atmosphere is noticeably more familial, and the meals, as if in gratitude, are more and more filled with magical moments. Or perhaps, anyone near Emma has just got something in their eye. She herself is sitting there, totally immersed, nibbling, enjoying tiny bite for tiny bite. Yes, every now and then there is some scolding. Niki is being blackmailed by his father with toys, which in terms of choice of means and atmosphere is hardly fitting. But, there are still four days left. Time also to channel the parents new worries – “Is it enough? What if later on…?” – in such a way that they can make room for eating.

NoTube’s success rate lies at more than 90 per cent, regardless of method, Netcoaching or camp. More than 500 families have been freed from the tube so far, and thus from all the fear and rubbish, equipment and projections. NotTube has placed food on the floor and coached the parents. The children did all the rest by themselves.

Ana is now feeding herself with liquids and tries this and that; Niki is eating during the day and is still tube-fed during the night; Emma, Lian and Lara are eating and drinking.

[i] The children’s names have been changed.