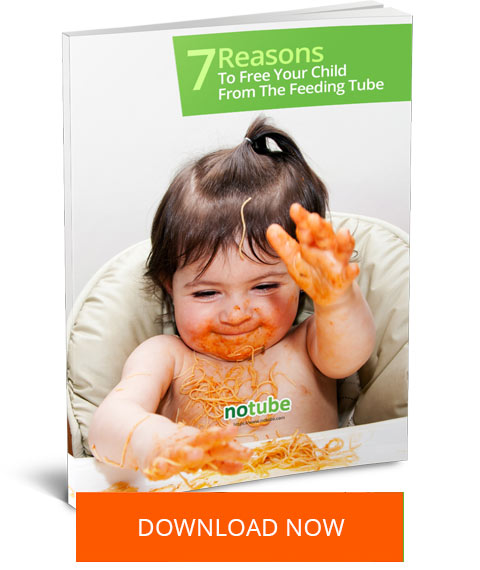 The “Normal” Child
Learning to eat is a normal process in a child’s development. This process requires common sense and a basic set of parental skills in sensitivity; cue reading; and a commitment to oral feeding and engaging with the child’s growing sense of autonomy and self-competence.

The “Special” Child
However, when a baby is born prematurely; suffers from a physical anomaly that requires immediate surgical intervention; or suffers from any other severe pediatric disorder, things are different. Suddenly, the essential developmental step of learning to eat fails to develop normally, and a feeding tube is often given to the infant or child. Subsequently, the child might become tube-dependent — a problem that arises when there is no exit plan.

Early Eating Behavior Disorders — “My Child Does Not Eat!”
There are three kinds of tubes that can ultimately lead to tube dependency and prohibit the oral feeding process:, the nasogastric tube (NG); the percutaneous endoscopic gastrostomy tube (called the PEG tube, G tube, or Mickey/button tube); and jejunostomy tube (also referred to as the J tube or PEJ tube).

How does tube dependency develop?
The feeding tube, which is initially inserted as an intervention intended to temporarily help the child thrive under extreme conditions, initially helps. However, over time, patients become dependent on the tube. Many who become dependent never learn to eat and show distinct food refusal and avoidance patterns, which leave both child and their family with traumatizing challenges and a significant financial burden.

What is tube dependency?
Tube dependency is a distressing and unintended result of infant tube feeding. Tube dependency can be defined as active refusal to eat and drink, lack of will to learn, and the inability and lack of motivation to show any kind of precursors of eating development and eating and drinking skills after a period of enteral feeding. It is often characterized by overt disinterest, food avoidance and active refusal, gagging, vomiting, oversensitivity, fussiness, and other oppositional and aversive behavior. It may negatively influence the affected infant’s quality of life to such a degree that it becomes insurmountable, and the child does not thrive even when enterally fed. Despite the severity of tube dependency, it is not recognized as a problem by many pediatricians. Tube dependent children are referred to as children with feeding disorders or early eating behavior disorders.

What is the best age for tube weaning?
As early as possible!  The development of normal eating behavior in the healthy child lasts from birth to 12-18 month. This is the natural time needed for the transition of the breast-, bottle-, or spoon-dependent infant to the self-feeding toddler. Most enteral tubes are given at the time of birth and end their specific purpose and indication soon after.

Ask your child’s medical team about your child’s suitability for our tube weaning program, and contact us today for more information about how to get started.

What do we do at NoTube?
NoTube is a counseling company that began at the Psychosomatic Division of the Medical University of Graz, Austria. You can learn more about our history, our team, and our programs here. Ultimately, our final goal is to drastically reduce the number of tube dependent children across the globe.

NEXT ARTICLE Does My Child Need A Feeding Tube? What You Should Expect From Your Child’s Medical Support Team
Additional topicsDiagnosesFeeding disordersFeeding TubeResources for parents and familiesWhat doctors say