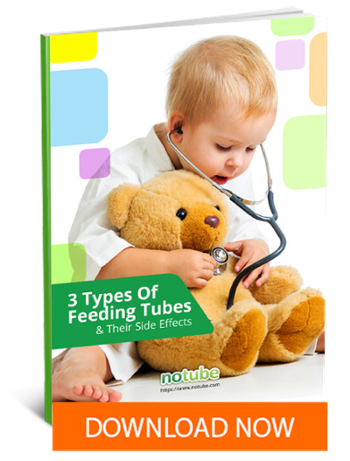 Why I fed myself with a tube for a week

This post will examine what I learnt from consuming all my nutrition by feeding tube for a week in order to better understand what families of tube-fed children have to go through. Click here for part 2.

In August 2014, I stopped eating for a week. 7 days, no food or drinks by mouth. I did this because I wanted to feel what the children we are treating are going through. I knew in advance that this would be an extreme adventure as I would have to have a feeding tube going down my throat and enteral nutrition all week. Ever since I was a child, I’ve been a bit extreme. As they say, fortune favors the bold. When I was six years old, I had an argument with my nanny. I packed my bags and called my mom from a phone booth. I told her that it’s either her or me. Luckily, my mom chose me. Ever since, I’ve often been rewarded for extreme behavior. At 21, together with my parents I founded NoTube. Me being a 3rd semester business student and them being only years before retirement. People told us we were crazy. But we had one simple mission: to free every child in the world from unnecessary feeding tubes.

But after 3,5 years and weaning over 300 children from their feeding tubes, I still felt: As the head of our company I didn’t really know what these kids have to go through.

How can you treat children if you don’t understand the pain they’re going through?

Our team members had published the first global studies on the side effects that tubes can cause and found that over 50% of tube-fed children suffered from severe reflux, retching or gagging and over 30% suffered from frequent vomiting (up to 30 times/day). We now know that over 30% of tube-fed children actually became malnourished as defined by the World Health Organization (WHO) as a result of the feeding tube. But still, I had no idea what it actually meant to be tube-fed.

With my parents being doctors and our family being one of many scientists (myself not included), I decided that this called for an experiment. I asked my parents to get some nasogastric feeding tubes and the special nutrition that is used when tube-feeding.

In the front you can see the nasogastric tube, two syringes (one with a soft tip, one with a needle), tape to attach the tube to my cheek and in the back the nutrition for 1 day, 2 liters of high-caloric nutrition (with 1 kcal/ml). I chose the children’s nutrition in order to really replicate the conditions our little patients face as close as possible. Since I had to carry this stuff around in my backpack, that’s almost 3 kg of weight including all the tape, syringes etc. So much for buying a MacBook Air to reduce the weight on my back!

This is me right before and after the first time the nasogastric tube was inserted by my brave mother Marguerite Dunitz-Scheer (she’s also a medical doctor and pediatrician, just in case you’re wondering):

Right before and after 1st tube insertion

As you can see from my teary/swollen eyes and the red cheeks, my body didn’t like the tube insertion very much. In fact, I choked a bit when it was first inserted and only when my mum told me to swallow I got it down the esophagus and placed correctly into my stomach. The area that hurt the most when the tube was inserted was the area right behind the nose, an area I didn’t even know existed or had any nerve endings prior to this experiment! There my tissue was hyper-sensitive. Presumably because it was done for the first time to me, it caused my nose to bleed a little. Also, my nose became clogged afterwards for about half an hour adjusting to the new condition of having a foreign object inside it. Interestingly, I couldn’t feel the tube making it’s way down the esophagus at all. When it was all the way down, we checked the correct placement by using the syringe to get acid from the stomach. Since we got some yellowish liquid out, we knew it was placed correctly.

That same night however, I suffered from my histamine allergy and sneezed for about 25 times in a half hour time frame. At about the 15th sneeze and because I was sneezing so heavily, a part of the tube came up into my mouth and into my upper throat. This seemed dangerous to me. I felt like something was blocking my ability to breath, choking me. In shock and out of reflex, I pulled the tube out since I thought I couldn’t breathe anymore. I calmed down after a minute or two but realized that the tube was out. We stored it in a bowl with water because apparently otherwise it would potentially clog (if any content that was left inside would have solidified).

Day 2 – Adjusting to the new reality, mentally and physically

After not eating dinner and spending the night without the tube, we put the tube back in the next day. By this time, I was really hungry and my stomach was longing for food, making funny sounds. I don’t think I had ever not eaten for such a long time apart from explicitly fasting for religious reasons. This time, I knew what was coming, but it didn’t make the experience more pleasant. We inserted the tube while in the parked car and sure enough, we got some viewers who were wondering what the hell we were doing. It was also only the second time that my mother Marguerite has inserted a feeding tube into one of her six children (first one the day before with me) and she said it was a little hard to see me cry when she put it in. I didn’t want to, but couldn’t avoid it because your fluid production just gets going once you start inserting the tube. I also had to choke and sneeze a couple of times when she inserted it and it hurt a little, sometimes pushing the tube back up unintentionally through these reflexes. The whole procedure however only took about five minutes and we started with the tube feeds. As you can see from the picture, again my eyes were teary and the tape all over my face.

Me after we inserted the tube in the car

Marguerite tube feeding me (after so many years, again!)

My first meal by tube

Since it was lunch time and I hadn’t eaten dinner the previous day or anything that day, Marguerite pushed in 400 ml of Nutrini max (8 full syringes) while still in the car because I was supposed to work thereafter. I parked the car and went to the office. I’m usually a sort of a hyperactive person and this must have been the first time in years that I’ve been really calm in front of our team since I was just kind of tired after the food which is filling to say the least. Since it was lunch and I needed 700-900 kcal, I continued to feed myself in the office.

My first time eating via tube at the NoTube office

Tube feeding is messy and can take a long time

In theory, you’d think eating via tube is a lot cleaner than normal eating. There’s a tube and some liquids, you push them in and that’s it. You’d also think it could be faster since you don’t have to spend time chewing. Each of those aspects however turned out to be not true.

In my experience, the opposite is actually true. To begin with, I asked my mother and Birgit (she had a feeding tube for some time after a bowel surgery) what I had to do and how the feeding should be done. I also researched online whether to feed myself 3x/day or whether I should go for a more continuous approach. Fearing the vomiting that we witnessed in so many tube-fed children, I chose to feed myself a little less than appropriate for my height/weight/age. When it came to feeding myself for the first time (Marguerite had done it in the car), I took one of the bags you saw on the picture above, inserted the syringe and pulled. It was really quite exciting! I took off the tip of the feeding tube, held it up (so as to prevent bubbles from the syringe to enter the tube, which causes air to be in the stomach, aka burping will occur) and inserted the first 50 ml. The tube nutrition was a bit cold and I felt it in the back of my throat. Karoline helped me, and it took us about an hour to get the other 500 ml (10 syringes) plus about 5 syringes of water (250 ml) into my body. Since the syringe was dripping frequently and I didn’t really yet know how to close the tip of the feeding tube, the whole affair was quite messy, luckily Sabine had some paper handkerchiefs ready. Also, we had to stop several times since I felt full already, worked a little on our laptops and then went back to the tube feeding business once I felt like I could take more again.

In the evening, my brother Noah filmed me for my first dinner, and it was quite fun, watching him watch me. In total, I had 600 ml of the high calorie formula and 250 ml of water, which makes 17 syringes, taking a lot longer than I would’ve taken orally for the same amount of calories.

The 4 most interesting aspects I learnt in this 1st stage

I made some interesting observations during these first two days related to the feeding tube:

It was an eventful day, as I’d been drinking and feeding myself entirely through the NG tube for an entire day for the first time in my life. To go to sleep, my mum just taped the feeding tube around both ears so that I wouldn’t pull it out during my sleep.

This is it for now, next week, I’ll talk about my experiences with feeding myself via the tube in public, dating with a feeding tube and whether I need to brush my teeth if I am not eating anything by mouth. What’s your guess?

Post your thoughts below in the comments and I’ll be happy to respond to any questions!