Lilly and her family live in France. She was born with a diaphragmatic hernia and, consequently, had to be tube fed via nasogastric tube. Over the course of several months, tube feeding became more and more difficult: Lilly’s gagging increased, she avoided oral eating… At the age of 8 months, her family started the Netcoaching program and Lilly discovered joy in relating to food. She likes yogurt, fruit puree and various finger foods. After less than three weeks, her nasogastric feeding tube could be removed. Since then, Lilly has been enjoying her tube free life!

Not easy. I am a nurse and was not at all afraid of Lilly’s feeding tube. But, we eventually felt that she no longer needed it and, most importantly, that she would do better without it. Changing the bandages became harder and harder. Her gag reflex became more pronounced… The worst part was seeing that Lilly genuinely had the desire to eat something but something stronger than she was kept her from doing so.

The morning on which I could finally pull the feeding tube out of Lilly’s nose.

But also being able to trust that Lilly could eat and drink in various places and in different positions, even while lying down when she played.

An end to the nightly enteral feedings and, consequently, calmer evenings and nights. An end to the difficulties in the parent-child relationship after bandage changes and tube attachment or placment (I always felt that Lilly resented me for this) or when we had to prevent her from pulling on the tube.

No more fear that an eating disorder might develop or worsen from always sensing the tube in this part of her body.

A calm mealtime, a great confidence in our child, that makes us very proud.

Many meals together, days shared with the family or with the Au Pair, who cares for Lilly when we are working.

Also the good fortune to have been able to visit Lilly’s great-grandfather for the weekend. And, soon to be planned vacations!!

Download Ebook: Choose the most suitable tube weaning program for your child: From NoTube’s experts For Parents

Tube Weaning is the process of stopping any tube feeding and for the child to sustain itself orally!

To help you make the right choice we offer some objective facts to help you in your research: 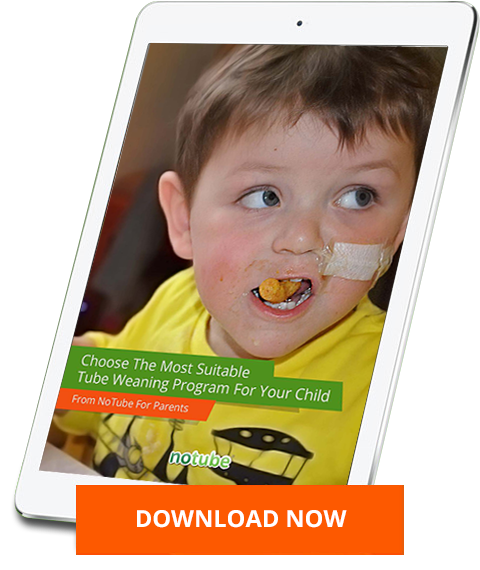