Mika from Germany was born with a malformation syndrome. An esophageal atresia made oral feeding impossible. After successful surgery, Mika was supposed to start oral eating; unfortunately, he refused to eat and drink. Mika vomited a lot on full tube feeds, and he showed signs of oral aversion. In April 2014, at the age of 16 months, his parents signed up for the Netcoaching tube weaning program. Mika began to eat and drink; after only three weeks, all tube feeds could be stopped completely! Since then, he sustains himself fully orally. Mika is now four years old and eats just as much as his little friends in kindergarten!

Due to the esophageal atresia and milk protein intolerance, Mika ate nothing orally before we came to NoTube. He refused food completely, despite the fact that he had started out well with swallowing and drinking small amounts after the esophageal operation. Since his birth, our days have consisted primarily of taking turns caring for Mika’s nutritional needs. He had his first “meal” at 7:30 in the morning and the last was finished in the middle of the night, around 3:30 am. He didn’t tolerate the tube feeding well at all and he often vomited, which meant that the tube feeds had to be done very slowly and in small portions. So, Mika had to be fed his milk every 4 hours, for over one hour. After feeding, he had to remain elevated on our arm for at least 1½ hours to reduce vomiting, which unfortunately continued to be a problem. The baby rocker or Maxi-Cosi also didn’t help as Mika vomited regularly with any position change. All of this severely limited our daily life and ability to participate in ordinary things. Everything had to be accomplished in the small spaces between Mika’s meals and an outing with Mika was usually pure stress since we never knew when he would (without warning) begin to vomit. Driving in the car with Mika sitting in his Maxi-Cosi in the backseat with no-one to watch him, was so stressful that we would only drive distances over 15 minutes with two adults. Since Mika sometimes still vomited hours after a meal, we were constantly worried that he might throw up unobserved and we would not notice it.

I admit that I was psychologically more than “tense.” Even after successful tube weaning and weight stabilization, Mika needed over 6 months to begin gaining weight again. I will never forget the look of confusion – followed by enjoyment – that crossed his face the first time he tried a cold mango sorbet. It was also remarkable that the vomiting ceased with the first reduction of the force-feeding on the first day of the weaning. Despite the esophageal operation, Mika has since only occasionally vomited. In our opinion, this has only happened when he had small pieces that got stuck in his throat and never as a result of overfeeding, foods or gastro-intestinal tract infections.

Definitely! The cow’s milk intolerance and high tendency toward allergy, whereby things such as soy and nuts also had to be avoided, initially posed a challenge for the team. It was necessary to find alternative grocery stores in order to offer Mika sufficient options while also fulfilling nutritional requirements and attaining a certain level of practicality (to bring on outings, for instance) – not all that easy when living in the country. I can’t even guess how many ingredient lists I read and calorie comparisons I made during that time. Nowadays, I like to provide support in the parents’ group when others are facing a similar challenge to the one we had to confront.

For us, it took a long time. To be honest, even after the successful weaning there were days where we were afraid and uncertain how we would manage some eating-related situations (for instance, when Mika entered daycare at nearly two-years-old).

Today, at 4 years of age, Mika eats just as much as his daycare friends. He is still a lightweight, but we know now that he will let us know when he is hungry or thirsty. He eats basically everything and loves to try new things – from pickled herring to fish eggs and salad, Mika tries it all and refuses barely anything. He always has his favorites that have to be on-hand in the refrigerator until they are replaced after a few weeks by a new discovery. At the moment, for instance the young man is enjoying his prosciutto. Although Mika is allowed to eat whenever and whatever he wants (chocolate is always freely available), Mika eats a very healthy and well-balanced diet; he loves cucumbers, for example.

All in all, we can finally participate normally in life. And, since Mika loves restaurants, we are often underway for long periods of time – without the stress and several changes of clothes.

It is amazing for our entire family to observe the joy with which Mika eats. Until it is completely empty, you are not permitted to clear his plate. Every drive begins with the question whether we have something along to eat. Mika now even eats with his fingers, something that had been a long-term problem for him. When he sits and squishes his fingers into the smoked salmon we celebrate it – even if it is, perhaps, not the best table manners 😀

Mika’s motoric abilities have developed astoundingly; he walks unassisted and loves to move around. If you ask us, this would never have been possible with the tube.

This free guide will help you find a way to afford the program of your choice to help your child.

Here you will find practical ideas and real world examples on: 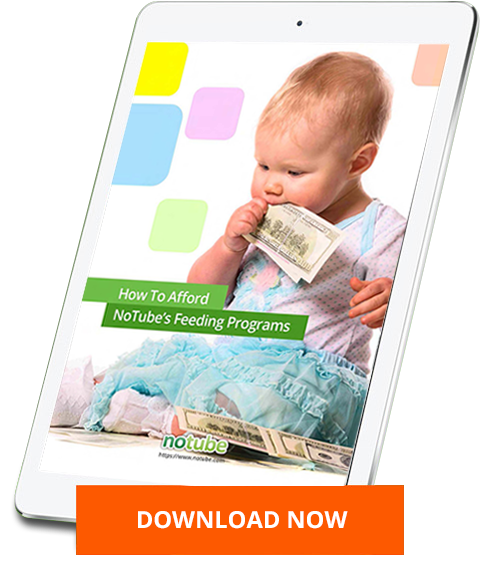