We love helping children learn to eat. Not just because it helps the child, but because it completely transforms entire families. We’ve seen it over and over again. We thoroughly enjoy hearing about our families’ experiences.
Share your story with us Patientenfeedback hier abgeben Envoyez-nous votre témoignage
Home › Meet Noémie!

Little Noémie and her family live in France. She has been seriously ill right after her birth, therefore, Noémie needed to be fed through a nasogastric tube. Fortunately, Noémie recovered fully, but she never learned to eat orally. Tube feeding led to severe side effects, Noémie vomited regularly, her parents were desperate. At the age of one, Noémie has been participated in the Netcoaching program. She started to try different drinks and kinds of food and increased her oral intake steadily, so tube feeds could be stopped and the nasogastric tube has been removed! Since then, Noèmie is feeling much better, she doesn’t vomit anymore and develops well!

Our daily life was exhausting between the tube feeds day and night, the vomiting, the alarms. It became increasingly difficult to place the nasogastric tube. We had to hold our child very tight and we felt guilty to do that to her. We  went out rarely because it needed much organization and limitation. It was frustrating to know that our child has been cured from its illness but we couldn’t get rid of that tube. Our doctors were also at a loss and recommended a G tube as an alternative. We had the feeling to be in a dead-end situation.

The first time when Noémie put her nose in a glass of Nutella! It felt like a disclosure to her! She enjoyed the Nutella and smeared it everywhere on her body. The program was also a possibility to get in touch with other families in the same situation, this was great support in addition to the success of the program.

At the beginning of the program I had difficulties to let my daughter explore food herself. The experts of NoTube found the right words to calm me and to support me through all stages of the wean.

Our daily life has changed completely! There are no limitations when we go out, no appointments during which we are told we have to wait for the “click” in her head, no vomiting during meal times….Noémie got curious about food and is even greedy about some things. She thrives without her tube and her whole family benefits from this.

Our first vacation by  the sea was magic! We went on adventures and  for walks without thinking about the pump, the tube or the tube feeding schedule! We were free. Family parties ware wonderful, Noémie was curious about all the good food offered on the table. For her birthday she loved to taste her cake which we were so happy about. 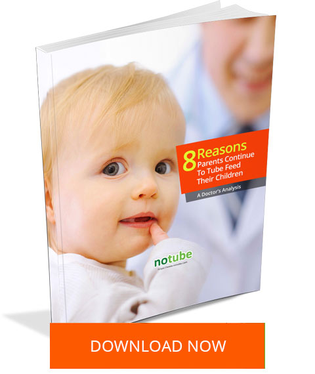